The <easing-function> CSS data type denotes a mathematical function that describes the rate at which a numerical value changes.

This transition between two values may be applied in different situations. It may be used to describe how fast values change during animations. This lets you vary the animation's speed over the course of its duration. It may also be used to interpolate between two colors in a color gradient. You can specify an easing function for CSS transition and animation properties.

<number> values representing the abscissas and ordinates of the P1 and P2 points defining the cubic Bézier curve. x1 and x2 must be in the range [0, 1], otherwise the value is invalid.

Indicates that the interpolation starts slowly, accelerates sharply, and then slows gradually towards the end. This keyword represents the easing function cubic-bezier(0.25, 0.1, 0.25, 1.0). It is similar to ease-in-out, though it accelerates more sharply at the beginning. 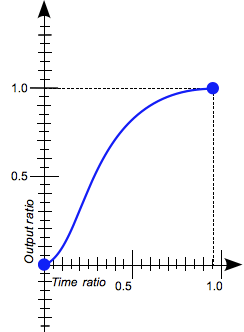 Indicates that the interpolation starts slowly, then progressively speeds up until the end, at which point it stops abruptly. This keyword represents the easing function cubic-bezier(0.42, 0.0, 1.0, 1.0). 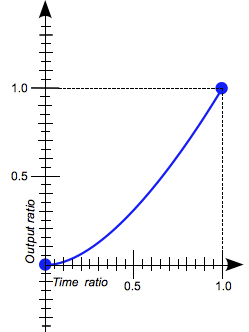 Indicates that the interpolation starts slowly, speeds up, and then slows down towards the end. This keyword represents the easing function cubic-bezier(0.42, 0.0, 0.58, 1.0). At the beginning, it behaves like the ease-in function; at the end, it is like the ease-out function. 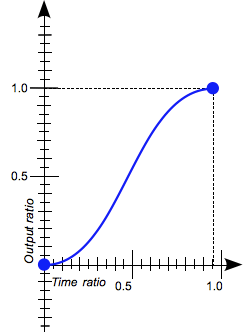 Indicates that the interpolation starts abruptly and then progressively slows down towards the end. This keyword represents the easing function cubic-bezier(0.0, 0.0, 0.58, 1.0).

One of the following keywords that indicate when the jumps occur:

Indicates that the interpolation jumps immediately to its final state, where it stays until the end. This keyword represents the easing function steps(1, jump-start) or steps(1, start). 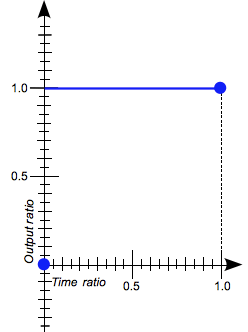 Indicates that the interpolation stays in its initial state until the end, at which point it jumps directly to its final state. This keyword represents the easing function steps(1, jump-end) or steps(1, end). 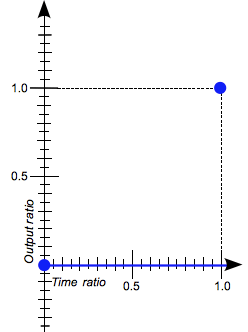 There are three types of easing functions:

The linear() function defines a piecewise linear function that interpolates linearly between its points, allowing you to approximate more complex animations like bounce and elastic effects. The interpolation is done at a constant rate from beginning to end. A typical use of the linear() function is to provide many points to create the illusion of a curve.

The linear keyword produces a linear() function with two points. This is equivalent to the easing function cubic-bezier(0.0, 0.0, 1.0, 1.0). 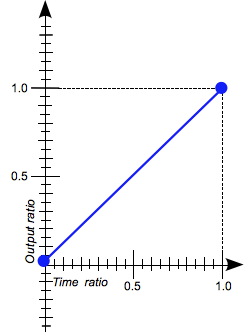 Not all cubic Bézier curves are suitable as easing functions because not all are mathematical functions; i.e., curves that for a given abscissa have zero or one value. With P0 and P3 fixed as defined by CSS, a cubic Bézier curve is a function, and is therefore valid, if and only if the abscissas of P1 and P2 are both in the [0, 1] range.

Cubic Bézier curves with the P1 or P2 ordinate outside the [0, 1] range can cause the value to go farther than the final state and then return. In animations, for some properties, such as left or right, this creates a kind of "bouncing" effect.

However, certain properties will restrict the output if it goes outside an allowable range. For example, a color component greater than 255 or smaller than 0 will be clipped to the closest allowed value (255 and 0, respectively). Some cubic-bezier() curves exhibit this property. 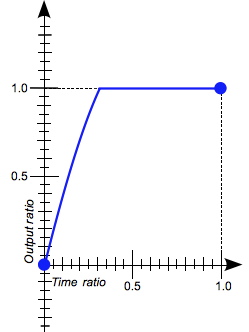 When you specify an invalid cubic-bezier curve, CSS ignores the whole property.

The cubic-bezier() function can also be specified using these keywords, each of which represent a specific cubic-bezier() notation: ease, ease-in, ease-out, and ease-in-out.

The steps() functional notation defines a step function that divides the domain of output values in equidistant steps. This subclass of step functions are sometimes also called staircase functions.

These are a few examples illustrating the steps() function: 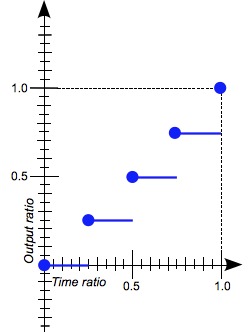 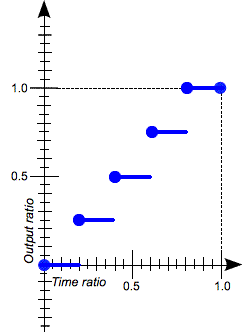 The steps() function can also be specified using these keywords, each of which represent a specific steps() notation: step-start and step-end.

This example provides an easy comparison between the different easing functions using an animation. From the drop-down menu, you can select an easing function – there are a couple of keywords and some cubic-bezier() and steps() options. After selecting an option, you can start and stop the animation using the provided button.

These cubic Bézier curves are valid for use in CSS:

These easing functions are valid:

Note: If the animation contains multiple stops, then the steps specified in the steps() function will apply to each section. Therefore, an animation with three segments and steps(2) will contain 6 steps in total, 2 per segment.

These easing functions are invalid: