The Broadcast Channel API allows basic communication between browsing contexts (that is, windows, tabs, frames, or iframes) and workers on the same origin.

By creating a BroadcastChannel object, you can receive any messages that are posted to it. You don't have to maintain a reference to the frames or workers you wish to communicate with: they can "subscribe" to a particular channel by constructing their own BroadcastChannel with the same name, and have bi-directional communication between all of them. 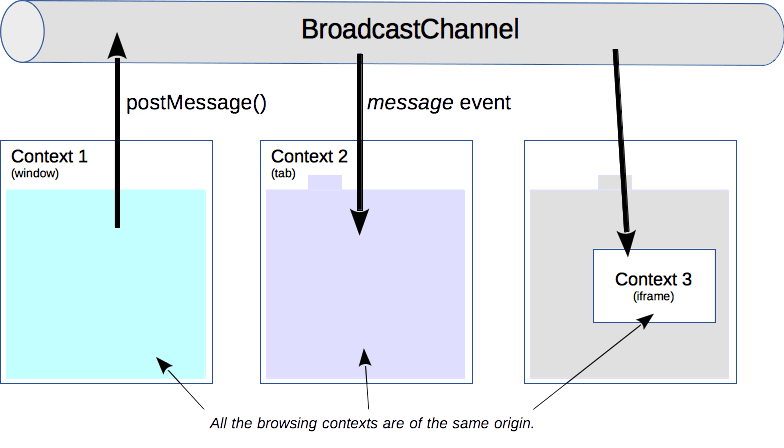 Creating or joining a channel

A client joins a broadcast channel by creating a BroadcastChannel object. Its constructor takes one single parameter: the name of the channel. If it is the first to connect to that broadcast channel name, the underlying channel is created.

It is enough to call the postMessage() method on the created BroadcastChannel object, which takes any object as an argument. An example string message:

Data sent to the channel is serialized using the structured clone algorithm. That means you can send a broad variety of data objects safely without having to serialize them yourself.

The API doesn't associate any semantics to messages, so it is up to the code to know what kind of messages to expect and what to do with them.

When a message is posted, a message event is dispatched to each BroadcastChannel object connected to this channel. A function can be run for this event using the onmessage event handler:

To leave a channel, call the close() method on the object. This disconnects the object from the underlying channel, allowing garbage collection.

The Broadcast Channel API's self-contained interface allows cross-context communication. It can be used to detect user actions in other tabs within a same origin, like when the user logs in or out.

The messaging protocol is not defined and the different browsing contexts need to implement it themselves; there is no negotiation nor requirement from the specification.

Want to get more involved? Learn how to contribute.

This page was last modified on Sep 15, 2022 by MDN contributors.