Anatomy of an extension

An extension consists of a collection of files, packaged for distribution and installation. In this article, we will quickly go through the files that might be present in an extension.

This is the only file that must be present in every extension. It contains basic metadata such as its name, version, and the permissions it requires. It also provides pointers to other files in the extension.

The manifest can also contain pointers to several other types of files:

For the extension and any buttons it might define.

JavaScript included with your extension, that you will inject into web pages. 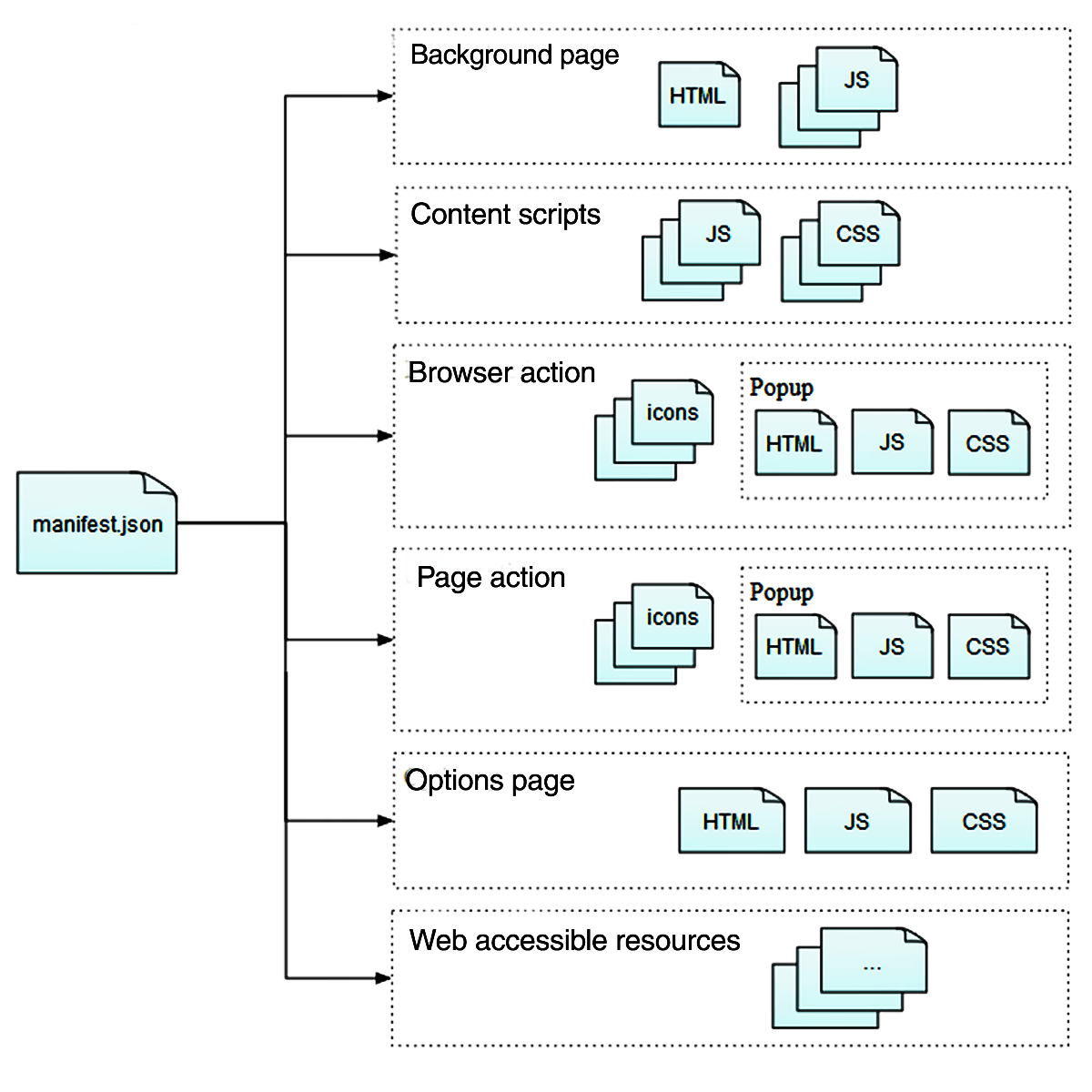 See the manifest.json reference page for all the details.

Along with those already listed in the manifest, an extension may also include additional Extension pages and supporting files.

Extensions often need to maintain long-term state or perform long-term operations independently of the lifetime of any particular web page or browser window. That is what background scripts are for.

Background scripts are loaded as soon as the extension is loaded and stay loaded until the extension is disabled or uninstalled. You can use any of the WebExtension APIs in the script, as long as you have requested the necessary permissions.

You can include a background script using the "background" key in manifest.json:

You can specify multiple background scripts. If you do, they run in the same context, just like multiple scripts that are loaded into a single web page.

Instead of specifying background scripts, you can specify a background page which has the added advantage of supporting ES6 modules:

Background scripts run in the context of a special page called a background page. This gives them a window global, along with all the standard DOM APIs provided by that object.

Warning: In Firefox, background pages do not support the use of alert(), confirm(), or prompt().

Background scripts can use any of the WebExtension APIs in the script, as long as their extension has the necessary permissions.

Background scripts can make XHR requests to any hosts for which they have host permissions.

Your extension can include various user interface components whose content is defined using an HTML document:

A pane that is displayed at the left-hand side of the browser window, next to the web page.

A page that's shown when the user accesses your add-on's preferences in the browser's native add-ons manager.

For each of these components, you create an HTML file and point to it using a specific property in manifest.json. The HTML file can include CSS and JavaScript files, just like a normal web page.

All of these are a type of Extension pages. Unlike a normal web page, your JavaScript can use all the same privileged WebExtension APIs as your background script.

You can also include HTML documents in your extension which are not attached to some predefined user interface component. Unlike the documents you might provide for sidebars, popups, or options pages, these don't have an entry in manifest.json. However, they do also get access to all the same privileged WebExtension APIs as your background script.

You'd typically load a page like this using windows.create() or tabs.create().

Content scripts are extension-provided scripts which run in the context of a web page; this differs from scripts which are loaded by the page itself, including those which are provided in <script> elements within the page.

Content scripts can see and manipulate the page's DOM, just like normal scripts loaded by the page.

Usually, when we talk about content scripts, we are referring to JavaScript, but you can inject CSS into web pages using the same mechanism.

For example, if a content script wants to insert some images into web pages, you could include them in the extension and make them web accessible. Then the content script could create and append img tags which reference the images via the src attribute.

To learn more, see the documentation for the "web_accessible_resources" manifest.json key.